Collaborating robots support people in the immediate vicinity in assembly work, the so-called human robot collaboration . We developed a combination of slip ring and rotary union for robot-guided, automated screw driving processes with plastic screws and monitoring of the torque.

The screw is guided and positioned with a vacuum. A control loop terminates the tightening process when the max. torque is reached. With its steel shaft, this combination can absorb the resulting forces and torques, but at the same time it is also weight optimized, so that it can be used on robots with a lower load capacity.

With a combination of an electrical slip ring for communication (Industrial Ethernet) and pneumatic , suitably designed as an element between robot arm and tool, rotations of more than 360° and several clamping processes can be realized in conjunction with continuous monitoring and communication for a wide range of applications.

This device can accommodate torques corresponding to the size. The pneumatic channels enable flexible use in changing tasks or later upgrading of your production system. 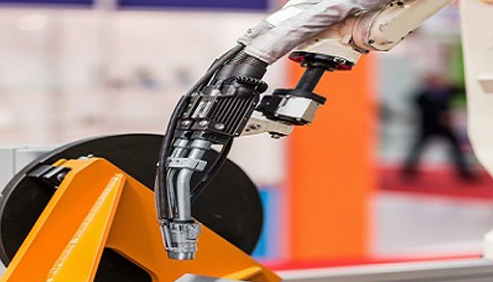